Air Alliance Houston is concerned about the health effects of a proposed freeway expansion on children attending schools within traffic-related air pollution (TRAP) zones. To investigate these effects, Air Alliance Houston used the 500 Cities data to conduct a health impact assessment (HIA) of the proposed I-45 highway expansion project, known as the North Houston Highway Improvement Project (NHHIP). The team used the data to quantify the project’s potential positive and negative health effects for inclusion in the final environmental impact statement. This project represents a model for integrating health impact assessments into future mobility projects in the Houston metropolitan area and for raising public awareness of the public health implications of freeways.

Air Alliance Houston is concerned about the health effects of the proposed I-45 expansion project that will cover roughly 24 linear miles of freeway in Houston, running from the I-45 North/Beltway 8 intersection on Houston's north side to the I-45/I-69/State Highway 288 intersection just south of Midtown.

Air Alliance Houston believes that this proposed highway expansion could specifically impact the health of the roughly 80,000 Houston-area children attending schools within TRAP zones adjacent to the freeway. Research has shown that children living or attending schools near highly congested freeways like I-45 are at greater risk of exposure to air pollutants, and exposure at such an early age can lead to long-term health and/or developmental implications. Furthermore, several traffic-related air pollutants—such as diesel particulate matter, benzene, 1,3-butadiene, and formaldehyde—are known to cause cancer, adding additional cause for concern.

To determine the potential effects of this highway expansion on health outcomes of children, Air Alliance conducted a health impact assessment to establish the ways in which this proposed policy could benefit and/or harm community health. This HIA has the following three main goals:

Focusing on nine schools located within 150 meters (500 feet) of the NHHIP project, the HIA is using a combination of 500 Cities data, external data sets, community data gathering, literature reviews, and stakeholder input to assess the potential positive and negative health effects associated with the following:

First, the team selected seven key 500 Cities health outcomes to consider in their analysis, identifying the following indicators as most relevant to their approach: asthma, cancer, coronary heart disease, chronic obstructive pulmonary disease, obesity, physical health, and mental health. They looked at these health outcomes in relation to the nine identified schools and considered relevant trends. 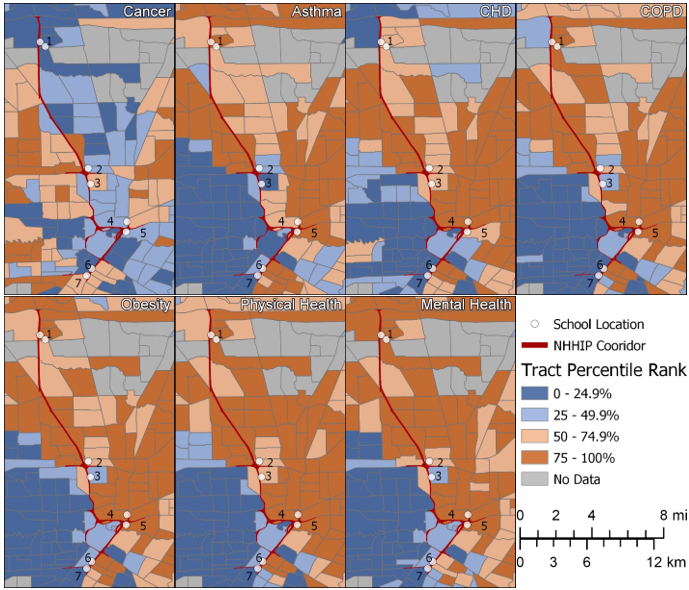 Air Alliance Houston combined these 500 health outcomes data with external data, consolidating a local health database of more than 70 social, environmental, and health data as well as several campus-level indicators on the census-tract level. The team pulled together data from the US Census, Center for Disease Control, National Air Toxics Assessment, Harris County Flood Control District, and Harris County Appraisal District (among other data points) to paint a larger narrative about health and health outcomes in the region.

To further inform their assessment, the Air Alliance team collected local data through questionnaires that asked school administrators about their campus air quality, collecting data on key indicators like how many cars idle near campus at pick-up and drop-off, how long students spend outdoors, and how safe students feel traveling near the highway.

The team gave presentations at local stakeholder convenings to gather additional feedback and insight from different players in the community on their project approach. The team summarized their findings in community workshop reports that outline community member feedback regarding where they currently experience negative health outcomes and what changes they would want to be made. 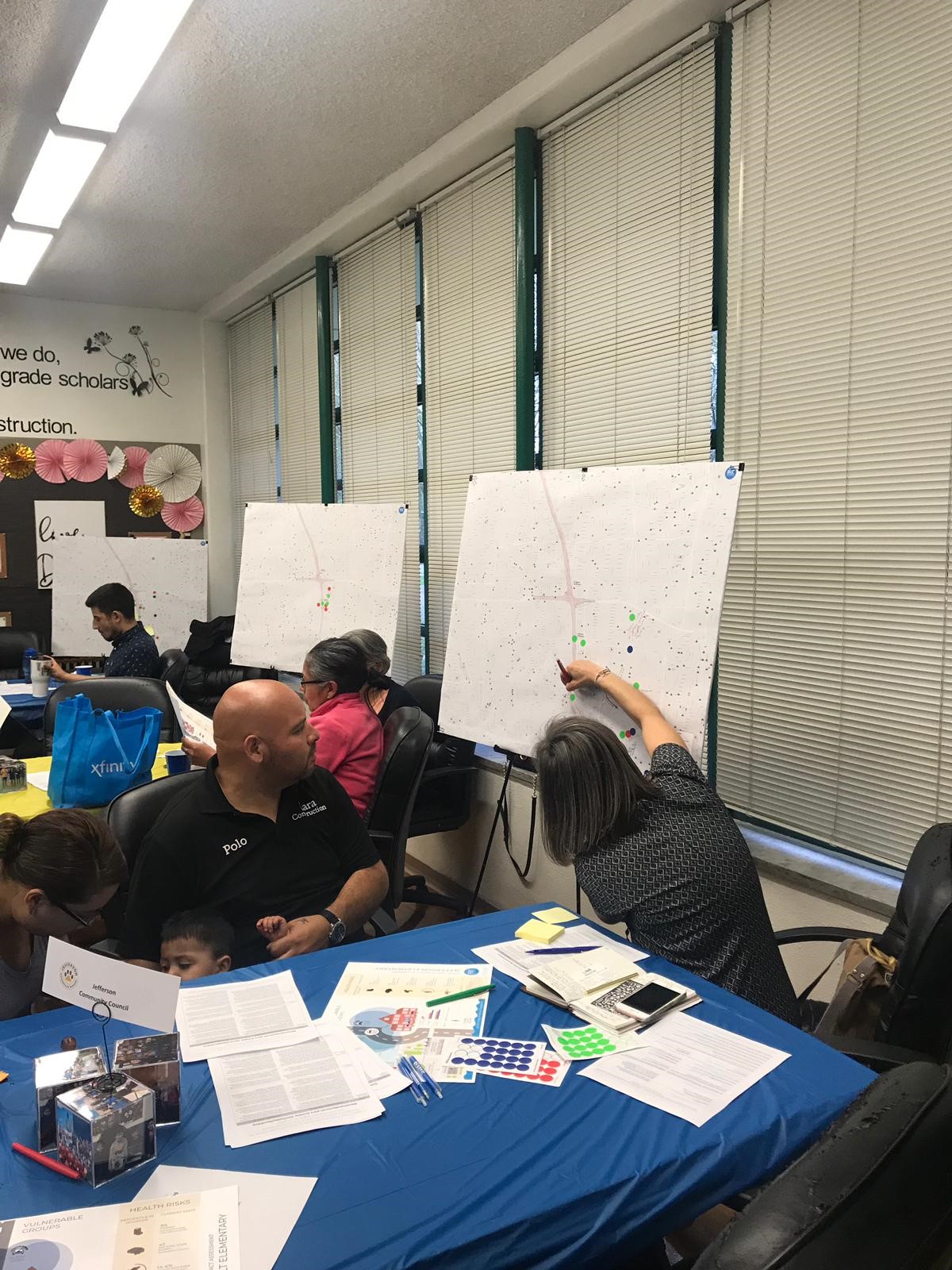 The team also created NHHIP one-pagers and infographics for a variety of stakeholder audiences (e.g., residents, elected officials), using the 500 Cities data to form the basis for comments related to neighborhood health status and set the geographical extent for comparisons between individual neighborhoods and the city. 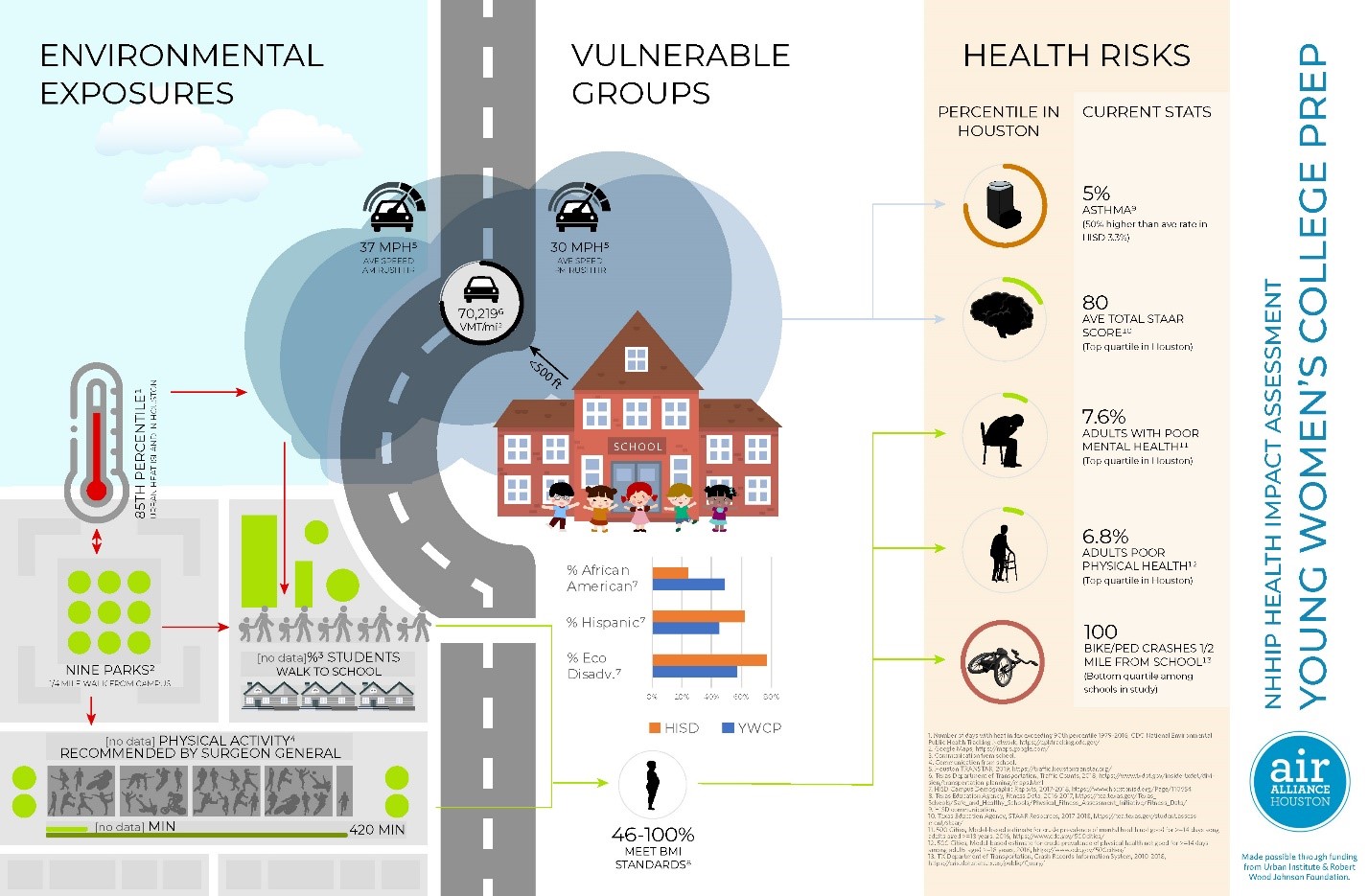 After conducting a rigorous analysis on the multiple levels of data gathered and collected, Air Alliance Houston synthesized their findings into the NHHIP Health Impact Assessment. Within the HIA, the team outlined community impacts and possible solutions that the Texas Department of Transportation, school systems, and other local actors could engage in to address health concerns including student health, environmental justice, and community safety.

In addition to the health impact assessment, Air Alliance Houston was able to use a powerful scenario-planning tool to perform a comprehensive National Public Health Assessment Module assessment on one to two school campuses along the NHHIP corridor. This tool combines environmental data from the US Environmental Protection Agency with a health outcome database of 40,000 individual health records to model the effects of changes in the environment on physical activity, obesity, mental health, general health status, and chronic disease. A second level of analysis is also available to predict health care costs associated with changes to prevalence of chronic disease and health outcomes related to increased exposure to air pollution.

By offering health data at the census-tract level, Air Alliance Houston knows the 500 Cities dataset significantly informed the baseline health conditions of the census tracts adjacent to the project, and that it played a critical role in the subsequent identification of mitigation strategies to address the adverse health impacts identified. From their experience working with the Houston tract-level data, Air Alliance Houston also saw that the adverse health conditions identified in the 500 Cities data often correlate with socioeconomic characteristics and disparities in the urban built environment, which might be a relevant topic for future study.

Air Alliance Houston has identified a few recommendations for organizations interested in pursuing similar projects centering in the 500 Cities data, outlined below:

To learn more about Air Alliance’s work, follow @airallianceHOU on Twitter. If you are interested in learning more about this team’s project approach or have specific questions regarding replicating their work in your community, please feel free to contact the Principal Investigator of this project, Bakeyah Nelson.